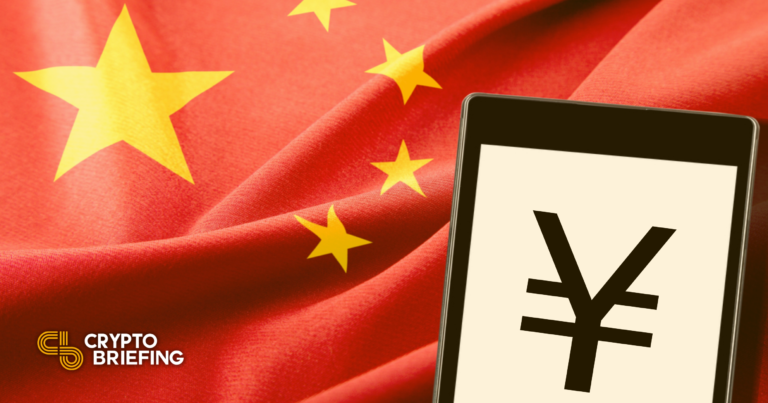 The People’s Bank of China (PBOC) stated in a new whitepaper that it is using smart contracts for its digital Yuan or e-CNY.
Smart contracts supported by e-CNY will act as self-executing payments executed on “predefined conditions.”
The whitepaper also discussed software wallets, hardware wallets, and matters related to transaction privacy.

The People’s Bank of China (PBOC) has published a new whitepaper on its Central Bank Digital Currency (CBDC), the digital Yuan.

The bank’s whitepaper states that it is using smart contracts for its digital version of the Yuan, also referred to as e-CNY.

These smart contracts will enable self-executing payments that are carried out based on predefined conditions agreed upon between two sides, according to the PBOC’s whitepaper.

Though smart contracts are typically built on a blockchain, the PBOC did not indicate whether e-CNY leverages blockchain technology.

Rather, the whitepaper suggested that e-CNY uses technologies such as digital certificates, digital signatures, and encrypted storage to achieve transactional security and prevent double spending.

This news means that the PBOC will be the first major central bank to integrate smart contracts with a CBDC. The whitepaper notes that smart contracts should boost “business model innovation.”

In addition to smart contracts, the PBOC’s whitepaper says that e-CNY can be stored with different tools, including software wallets and hardware wallets based on security chips.

The document also suggested that, in order to enhance the security of storage devices, components can be added to mobile phones, wearable objects, and Internet of Things (IoT) devices.

The PBOC claimed that importance will be given to safeguarding personal data and privacy of transactions, adding that e-CNY “collects less transaction information than traditional electronic payments.” It added that transaction data will not be shared with third parties or government agencies unless stipulated in the current laws.

These claims stand in contrast to media reports, which suggest that China will likely use e-CNY for financial surveillance.

China Is Moving Toward a Launch

The PBOC has been researching its digital fiat currency since it formed a working committee to study the technology in 2014.

Though China has not yet implemented a nation-wide roll out of e-CNY, several pilot tests have been conducted in different cities. With the new whitepaper, the central bank has made it clear that it is quickly moving towards a broader e-CNY launch.

As the country makes progress on its CBDC, other nations are slowly catching up. Many countries are now looking at the potential for a CBDC to enhance global financial infrastructure, and to respond to the growing demand for cryptocurrency.

Notably, the U.S. Federal Reserve recently partnered with MIT to research the technological architecture of a CBDC. However, the agency is still undecided on whether to develop a digital dollar.

Powell also commented on the possibility of a digital dollar.  Powell Discusses Crypto  Federal Reserve chairman Jerome Powell has aired more thoughts on cryptocurrencies.  Speaking in testimony before the Senate…

After the World’s First CBDC, China Now Wants to Build a Blockch…

In a 145-page document, the Beijing municipal administration presented a two-year roadmap for a blockchain-based programmable governance model. More than 100 government services in China are already using blockchain technology….

The head of China’s central bank digital currency (CBDC) research said in a business convention that complete anonymity is impossible. China Firm on “Controllable” Privacy of CBDC  Mu Changchun, the…