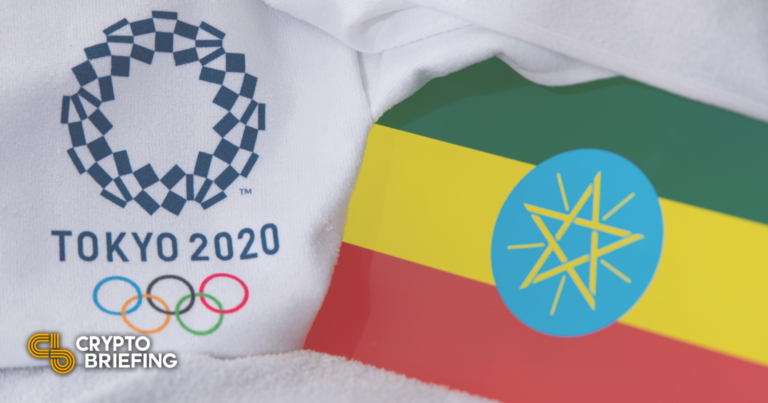 Ethereum fans are showing their support for Ethiopia after Twitter added the country’s flag to the “ETH” hashtag in celebration of the Olympics.
A DAO called EthiopiaDAO has formed, while some community members have suggested sponsoring the country’s Olympic team.
The Olympics thanked Twitter founder Jack Dorsey and the wider crypto community for their support.

Ethereans are voicing their support for Ethiopia.

Ethereum fans are backing Ethiopia ahead of the Tokyo Olympics.

Members of the second-ranked blockchain’s community began showing their support for the African nation after Twitter added national flag emojis for each of the teams appearing at the upcoming Tokyo Olympics. The social media platform added the Ethiopia flag to the hashtag “ETH,” which coincides with the name for Ethereum’s native currency.

Ethereum enthusiasts quickly adopted the hashtag and united in showing support for Ethiopia. Many reposted the country’s flag, similar to how Bitcoiners and other crypto believers collectively adopted “laser eyes” on their Twitter avatars earlier this year. Since the flag surfaced on Twitter, a decentralized autonomous organization called EthiopiaDAO “centered around Ethiopia and blockchain education” has formed. A member of the DAO told Crypto Briefing:

“While there isn’t a clear vision of exactly how EthiopiaDAO can help today, we have the tools and know how to coordinate capital globally towards whatever we decide to put our efforts towards. Currently there seems to be memetic alignment between communities and we’d like to capture that momentum towards funding communal goods that could have real world benefits to Ethiopia, and the Ethereum ecosystem at large.”

Meanwhile, several community members have suggested supporting the country in other ways. Brantly Millegan, director of operations at Ethereum Name Service, reached out to Ethiopia’s Ministry of Foreign Affairs to suggest sponsoring the country in the Tokyo Olympics. Meanwhile, Mike Demarais, co-founder of the Ethereum wallet rainbow, shared a similar proposal and suggested that Ethereum could “copy/paste el salvador strat but for vitalik coin.“ El Salvador made history when it adopted Bitcoin as legal tender last month, indicating that Demarais was most likely proposing a campaign to make ETH an official currency in Ethiopia.

Jack Dorsey, Twitter and Square founder and longtime Bitcoin evangelist, also joined in with the trend by posting the hashtag in a tweet. In the crypto world, Dorsey is best known for his ardent support for Bitcoin, though he’s been less enthusiastic about Ethereum and other cryptocurrencies. The official Olympics Twitter account responded to Dorsey’s post to say it was “great to see” him and the crypto community supporting Ethiopia’s athletes.

Great to see @jack and the crypto community supporting the #ETH athletes! 👏

Ethereum isn’t the only cryptocurrency project to show support for Ethiopia: earlier this year, Cardano’s IOHK partnered with the country’s government to develop a blockchain system focusing on student performance in schools. The deal will involve five million Ethiopian students having their digital identities stored on the blockchain.

The Tokyo Olympics runs from today until Aug. 8. Representatives from the country are yet to respond to the Ethereum community, though ETH has enjoyed an overnight rise: it’s back above $2,000, up around 4%.

Disclosure: At the time of writing, the author of this feature owned ETH, ETH2X-FLI, and several other cryptocurrencies.

Bitcoin supporters including CEOs and politicians have changed their Twitter profile pictures to display laser eyes as a way to celebrate BTC growth. Celebrating Bitcoin Benchmarks like Mutants The Chairforce and…

The lead developer for Cardano (ADA) is planning to develop a new cryptocurrency in collaboration with the government of Ethiopia, in order to provide a secure and dependable means of…

Ethereum “Has to Expand” Beyond DeFi: Vitalik Buterin