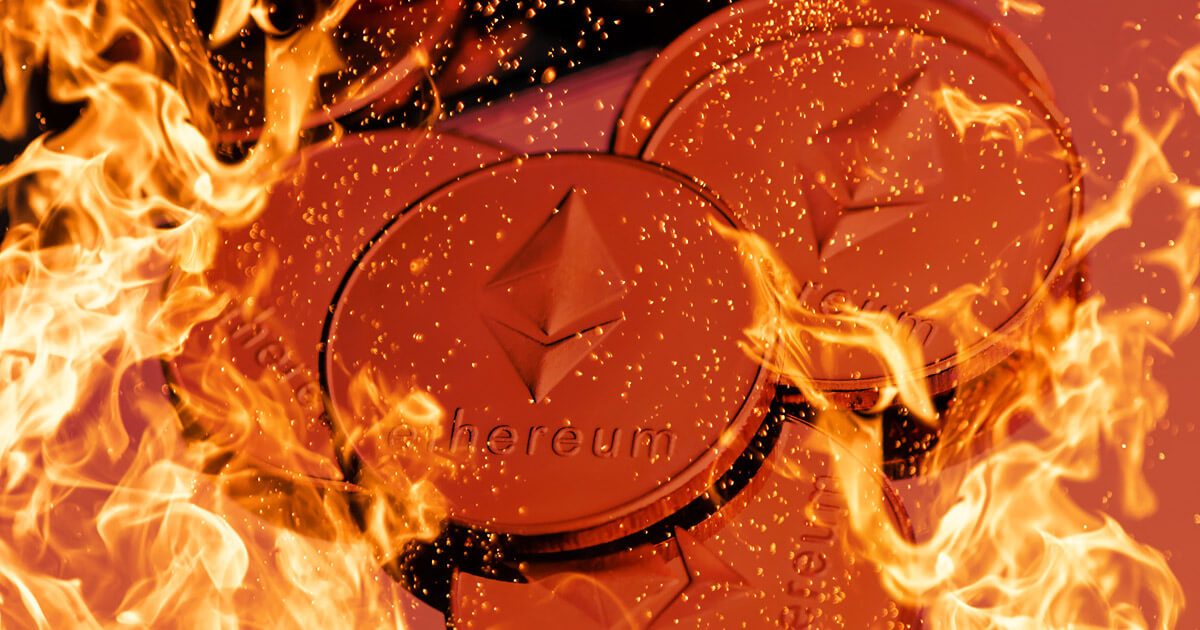 Barely a week after implementing one of its cardinal upgrades, the Ethereum (ETH) network has burned over $100 million in fees.

More than 32,000 Ethereum burned and forever removed from circulation contributed to the crypto’s last week’s rally.

Why is Ethereum on fire

The long-anticipated London hard fork, which included the EIP-1559 upgrade, a reductive measure set to reign in Ethereum’s supply growth, boosted the price of the world’s second-largest crypto by 18.7%.

Instead of going directly to the miners that process and validate transactions, since the London hard fork, Ethereum’s base fees are being burned by the network and destroyed forever.

The upgrade, which made the transaction fees more predictable, is playing out as envisioned in theory.

Since its implementation, Ethereum’s base transaction fee is algorithmically determined and fluctuates depending on how congested the network is.

Based on an automated bidding system, users tip miners for having their transactions processed quicker as the base fee amount bites the dust forever, proactively reigning in Ethereum’s supply and causing its value to grow.

Since the London hard fork

Ethereum co-founder Vitalik Buterin recently said that the upgrade’s success proved the ecosystem’s ability to change for the better, showing confidence in delivering ETH 2.0, scheduled for release in early 2022.

Once ETH 1.0 and ETH 2.0 chains, which will be running in tandem, finally merge, the Ethereum network will completely transition to a proof-of-stake consensus mechanism, dramatically lowering its energy consumption.

Since the London hard fork has lit the bonfire on August 5, Ethereum pushed through the $3000 mark on August 7, for the first time after the May downturn.

Sold your $ETH below 2k was a bad decision. pic.twitter.com/S7Qkgg3YdH

As per data from Ultrasound.money, the ultimate firestarter is a non-fungible token (NFT) marketplace called OpenSea that alone burned over 4,000 tokens, accounting for more than 12% of the total burn so far.

Second on the burner list is Uniswap V2, a decentralized exchange (DEX) that thus far burned more than 2,400 Ethereum, accounting for more than 7% of the raging flame.

Join now for $19/month Explore all benefitsPosted In: Ethereum, ETH 2.0