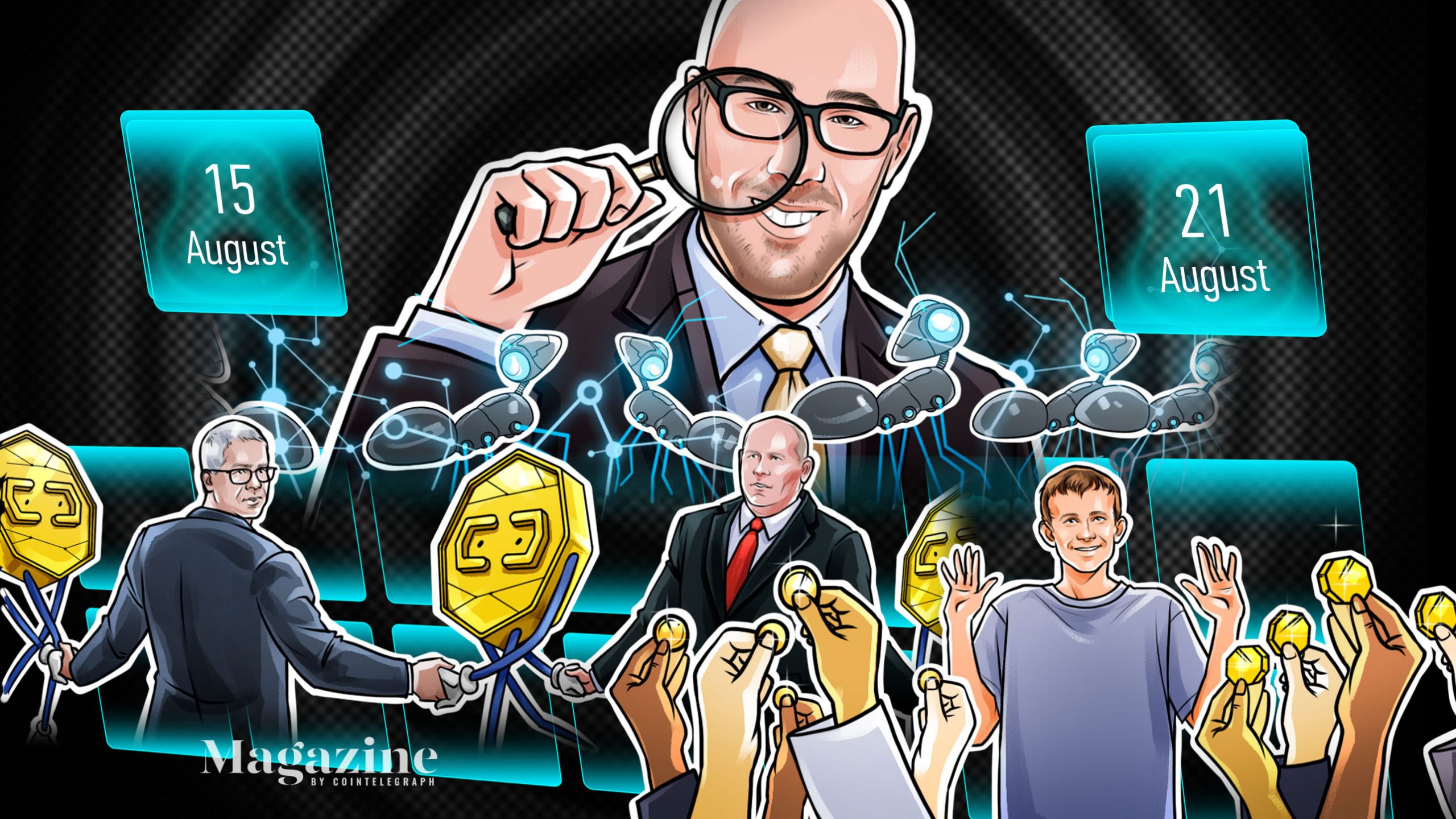 Coming every Saturday, Hodler’s Digest will help you track every single important news story that happened this week. The best (and worst) quotes, adoption and regulation highlights, leading coins, predictions and much more — a week on Cointelegraph in one link.

On Aug. 16, it was reported that U.S. retail giant Walmart was seeking out an experienced crypto expert who can develop and drive a digital currency strategy and product roadmap for the firm.

According to the job listing, Walmart is looking for someone with a track record of leading and scaling businesses. They also want at least 10 years of experience in product/program management and tech-based product commercialization.

Ideally, the candidate should also know a thing or two about crypto, blockchain tech and why JPEGs of poorly drawn pet rocks are selling for absurd prices on Ethereum.

Walmart’s future digital currency and crypto product lead will be based in the company’s home office in Bentonville, Arkansas. The state has produced talents such as Billy Bob Thornton and Johnny Cash, along with Bill and Hillary Clinton.

There was good news for Doge fanatics this week as the Dogecoin Foundation resurfaced after several years of total media silence.

According to an announcement on Tuesday, the foundation stated it was reestablishing itself in a bid to support the fiery-eyed Dogecoin (DOGE) community. The foundation also said it would be announcing new projects that are centered on encouraging adoption of DOGE and promoting its utility.

It is yet to be revealed if Musk’s “toddler hodler” son has loaded up on DOGE in light of the announcement.

Coinbase, the top U.S. crypto exchange, has amassed a cash-based war chest worth $4 billion on the back of two very productive quarters for the firm.

The company reportedly expected to use the cash to cover costs incurred by a variety of factors, including conforming to new regulations handed down by the United States legislature.

Coinbase has also announced its official launch in Japan in partnership with banking giant Mitsubishi UFJ Financial Group, while also revealing plans to add $500 million worth of crypto to its balance sheet and invest 10% of all generated profits into digital assets moving forward.

For more info on crypto prices, make sure to read Cointelegraph’s market analysis.

“Poly Network has no intention of holding Mr. White Hat legally responsible, as we are confident that Mr. White Hat will promptly return full control of the assets to Poly Network and its users. As we have stated in previous announcements and encrypted messages that have been made public, we are grateful for Mr. White Hat’s outstanding contribution to Poly Network’s security enhancements.”

“Lawmakers and regulators must work together to properly balance protecting innovation with any new regulations to ensure the digital asset marketplace flourishes in the United States.”

“The most important thing that can be done today is moving away from the idea that coin voting is the only legitimate form of governance decentralization.”

“Here at home in America, […] our payments infrastructure is arguably the worst of any developed country in the world, and increasingly falling behind, while China is moving with determination and haste to build an infrastructure that will make the digital yuan a challenger to the dollar as the world’s reserve currency.”

“Ethereum is outperforming Bitcoin, and it can be expected to continue this trend for the rest of 2021.”

“This is all about DeFi. […] This is the Treasury Department trying to work out how to get jurisdiction over DeFi […] and also expand its warrantless surveillance over a peer-to-peer financial system.”

“Frankly, as one of the first pilots, we have on the table the question of paying salaries to employees of the Ministry of Digital Transformation in electronic hryvnia.”

“It’s important to remember that when we look at the business, the long-term arc of adoption of digital assets in crypto matters far more than the businesses we are building.”

Prediction of the Week

Bitcoin, the crypto industry’s largest asset by market cap, and Ethereum (ETH), the second-largest asset, have both posted notable price recoveries over the past several weeks. Although BTC has yet to be surpassed as the crypto industry’s top dog, ETH might tap its own all-time price high near $4,400 sooner than BTC reaches its record level of nearly $65,000, according to thoughts from CryptoQuant CEO Ki Young Ju.

On Friday, BTC fluctuated above the $48,000 mark, and ETH traded above $3,200 — which, however, are both still notably shy of their record highs.

FUD of the Week

“Shoutout to @Chase for shutting down @compass_mining accounts for doing our part to replace the old guard with self-sovereign, future-focused supporters of hard money. Get behind #Bitcoin or get out of our way.”

It is unclear if the temper tantrum will be enough to sway JPMorgan Chase to change its mind, and it is also unclear how shutting down banking services to one Bitcoin mining firm represents an attack on BTC in any way.

If anything, the banking giant has been upping its exposure to Bitcoin and the crypto sector in 2021.

Liquid exchange hacked to the tune of $80 million

Liquid, a Japanese crypto exchange, was the victim of a $80 million-plus hack this week which made the platform not so… liquid.

Cointelegraph reported on the news quickly after the exchange announced the attack, which compromised digital assets including BTC, Tron (TRX), Ripple (XRP) and Ether.

The exchange explained that only its hot wallets were affected and added that its assets were being moved into cold storage for security purposes.

The platform has since provided an update and revealed the hack totaled $91.35 million. The firm has urged users to not deposit any crypto assets in Liquid wallets until further notice.

Speaking of hacks, U.S. telecom giant T-Mobile was looking into an alleged massive data breach at the start of this week that may have compromised the information of more than 100 million users.

According to Vice’s Motherboard, T-Mobile is looking into a potential data breach claimed by an author who posted details on an underground forum. A Sunday report said the hacker claims to have obtained data on more than 100 million customers from T-Mobile servers.

Unlike the Poly Network hacker, who syphoned $600 million worth of digital assets because “cross-chain hacking is hot,” the T-Mobile hacker seems to be displaying entrepreneurial instincts, as they were asking for 6 BTC —  worth around $280,000 at current prices —  in exchange for some of the data.

Shanghai Special: Crypto crackdown fallout and what happens next

Owning Bitcoin isn’t banned, but many fear for the future of regulations in China. Here’s a look at where we stand and where we might be headed.

The DeFi hacker’s initial intentions remain unclear, but they refused to accept a $500,000 bounty after returning all funds.

There is a silver lining from the DeFi hacks as new tech develops to protect the sector: “DeFi will be much safer in 12 months from now.”