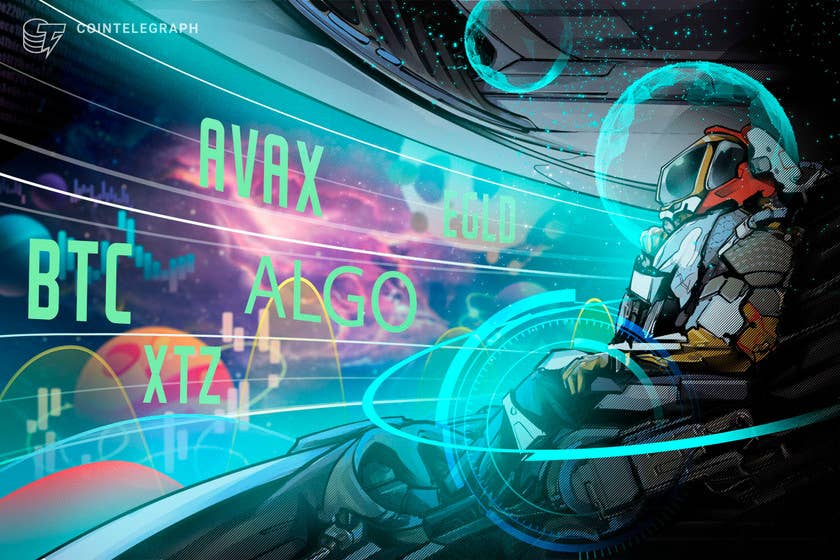 Deutsche Bank analyst Marion Laboure said in an update on the bank’s website that Bitcoin (BTC) is likely to “remain ultra-volatile in the foreseeable future” as most people buy it either for investment or for speculation rather than using it as a medium of exchange.

However, Laboure believes that Bitcoin could become “the 21st century’s digital gold” and the trend could continue for centuries with no major control by the government.

At Morningstar’s yearly investment conference, Dennis Lynch, the head of asset management at Counterpoint, likened Bitcoin to the South Park cartoon character Kenny. Lynch said: “I like to say that bitcoin’s kind of like Kenny from South Park — he dies every episode, and is back again.”

As the effect of the China FUD diminishes, let’s study the charts of the top-5 cryptocurrencies that may remain strong in the short term.

Bitcoin has once again bounced off the 100-day simple moving average ($41,002), suggesting that bulls are attempting to defend this level aggressively. The bulls will now try to push the price above the 20-day exponential moving average ($45,178).

The downsloping 20-day EMA and the relative strength index (RSI) in the negative zone suggest that bears have the upper hand. If the price turns down from the 20-day EMA, the possibility of a break below the 100-day SMA will increase.

Such a move will complete the bearish head and shoulders pattern, which has a target objective at $32,423.05.

The bulls will have to push and sustain the price above the overhead resistance at $48,843 to open the doors for a possible rally to $52,920. A break and close above this level could signal the resumption of the uptrend.

The BTC/USDT pair is witnessing a tough tussle between the bulls and the bears near the neckline. The bulls have pushed the price above the 20-EMA and will next try to clear the overhead hurdle at $45,200.

If they can pull it off, the pair could climb to $49,000. Conversely, if the price turns down from the current level, the bears will try to pull the price below the critical support zone at $41,000 to $39,600. A violation of this zone may indicate the start of a downtrend.

Avalanche (AVAX) is trading inside an ascending channel pattern. The long tail on today’s candlestick suggests that bulls are aggressively buying on dips to the 20-day EMA ($61).

The rising moving averages and the RSI in the positive zone indicate advantage to buyers. The AVAX/USDT pair could now try to retest the all-time high at $79.80. This is an important level to watch out for because a break above it could signal the resumption of the uptrend.

The pair could then rally to the resistance line of the channel and the bullish momentum may pick up if this hurdle is crossed.

Conversely, if the price turns down from the current level or the overhead resistance and breaks below $60.04, it will suggest the start of a deeper correction to the 50-day SMA ($45).

The pair has bounced off the 100-SMA and the bulls are attempting to sustain the price above the 20-EMA. If they manage to do that, the pair could start its northward march to $79.80 where the bears may again mount a stiff resistance.

On the downside, the critical level to watch is the support line of the channel. A break and close below this support will be the first indication that the bulls may be losing their grip. If the price slips below $60.04, the decline could extend to $55.

Algorand (ALGO) is trading below the 20-day EMA ($1.77) but the long tail on today’s candlestick suggests that bulls are attempting to defend the support at $1.51.

If bulls drive and sustain the price above the downtrend line, it will suggest that the short-term correction could be over. The ALGO/USDT pair could then rise to $2.15 and then to $2.55.

A break and close below $1.51 will signal a possible change in trend. The pair could then slide to the next support at $1.15.

The pair is trying to rebound off the strong support at $1.51 but the recovery may hit a barrier at the moving averages and then again at the downtrend line.

If the price turns down from the overhead resistance, it will indicate that sentiment remains negative and traders are selling on relief rallies. That will increase the likelihood of a break below $1.51.

This negative view will be negated if the price rises and sustains above the downtrend line. The bulls will then make one more attempt to resume the up-move.

Tezos (XTZ) rebounded sharply from the breakout level at $4.47 on Sept.22, indicating aggressive buying on dips. The bulls pushed the price back above the 20-day EMA ($6.10) on Sept. 23 and have held the level since then.

The moving averages are sloping up and the RSI is in the positive territory, suggesting that bulls have the upper hand. The buyers are likely to challenge the overhead resistance zone at $8.03 to $8.42.

A breakout and close above this zone will signal the start of the next leg of the uptrend. The pair could then rally to the psychological mark at $10.

Contrary to this assumption, if the price turns down from the current level or the overhead resistance and breaks below the 20-day EMA, the pair could drop to $4.47.

The pair is attempting to rebound off the 20-EMA, indicating that sentiment has turned positive and traders are buying on dips. The bulls will now try to push the price to the overhead resistance at $7.50.

If this level is scaled, the pair may rally to $8.03 where the bears are likely to mount a stiff resistance. If bulls do not give up much ground from this resistance, the possibility of a break above it will increase.

This bullish view will invalidate if the price turns down and breaks below the moving averages. Such a move could result in a drop to $5.50 and then $4.47.

Elrond (EGLD) bounced off the 50-day SMA ($181) but could not clear the overhead hurdle at $245.80. This suggests that bulls are buying on dips while bears are selling on rallies.

The 20-day EMA ($220) has flattened out and the RSI is just above the midpoint, indicating a balance between supply and demand.

On the contrary, if bears pull the price down from the current level, a retest of the 50-day SMA is possible. A break and close below this support could open the doors for a further decline to the 100-day SMA ($132).

The pair has bounced off the uptrend line, which suggests that traders are buying on dips. The bulls will now try to propel and sustain the price above the downtrend line. If they succeed, the pair may resume its up-move and rally to $277.88 and then to $303.03.

Contrary to this assumption, if the price turns down from the downtrend line, the bears will try to gain an advantage by pulling the price below the uptrend line. Such a move could clear the path for a deeper correction.

The views and opinions expressed here are solely those of the author and do not necessarily reflect the views of Cointelegraph. Every investment and trading move involves risk, you should conduct your own research when making a decision.