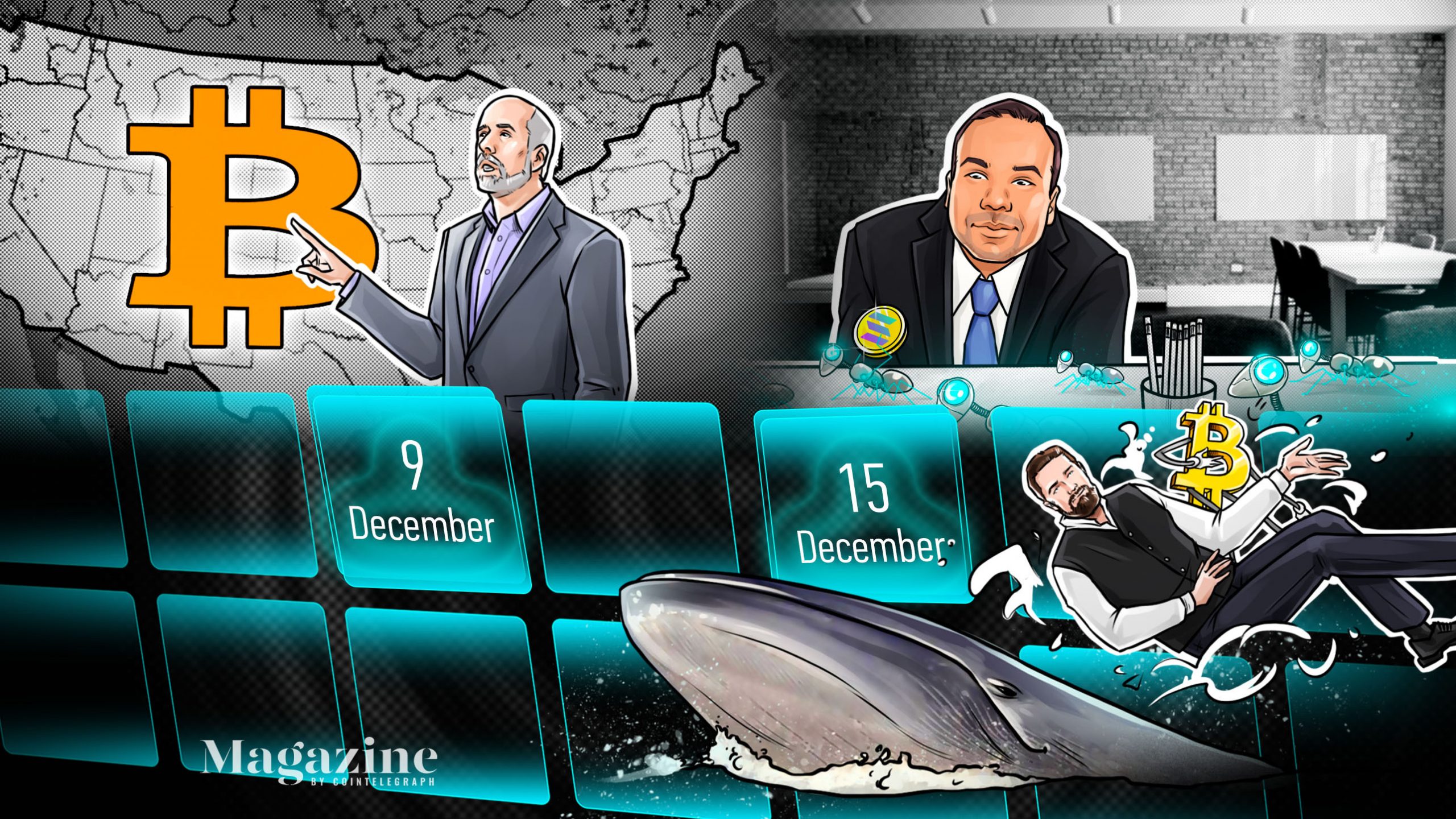 Coming every Saturday, Hodler’s Digest will help you track every single important news story that happened this week. The best (and worst) quotes, adoption and regulation highlights, leading coins, predictions and much more — a week on Cointelegraph in one link.

Binance CEO CZ is the richest crypto billionaire at $96B: Bloomberg

Bloomberg has estimated Binance CEO Changpeng Zhao — also known as “CZ”— to be the 11th-richest person in the world at a net worth of around $96 billion, making him the wealthiest billionaire in crypto.

However, Bloomberg’s tabulation excluded CZ’s personal holdings of crypto assets such as Bitcoin and Binance Coin, suggesting that the $96 billion could become much larger in the future.

To make the list of the top 10 richest people, CZ will need to look under his sofa and find a spare $11 billion to surpass Oracle co-founder Larry Ellison. Topping the list is South African bad boy and Tesla co-founder Elon Musk, who has accumulated $263 billion on the back of the success of his heavily subsidized electric vehicle company.

Disney has obtained a patent that will enable the creation of personalized interactive attractions for its theme park visitors.

The technology could reportedly be used to develop licensed, headset-free augmented reality attractions, involving such features as personalized 3D effects displayed on physical spaces across its parks that correspond with visitors’ journeys to different locations.

The patent, dubbed the “Virtual-world Simulator,” was filed in the United States. It appears the move is part of Disney’s broader push to enter the metaverse sector, with CEO Bob Chapek noting in a Q4 conference call last year:

“We’ll be able to connect the physical and digital worlds even more closely, allowing for storytelling without boundaries in our own Disney metaverse.”

Billionaire investor Bill Miller puts 50% of net worth in Bitcoin

Famous investor Bill Miller has now put 50% of his net worth in Bitcoin, as well as major industry firms like Michael Saylor’s MicroStrategy and BTC mining firm Stronghold Digital Mining.

Miller was an early investor in Amazon, which he says still accounts for nearly 100% of the rest of his portfolio. He said he’s been gradually accumulating Bitcoin since the price hit $30,000 in mid-2021.

The investor stated that he no longer considers himself just a “Bitcoin observer” but rather a real Bitcoin bull. Miller initially bought his first Bitcoin back in 2014 when BTC was trading around $200 and then purchased a “little bit more overtime” when it became $500.

Former Tongan member of parliament Lord Fusitu’a outlined a bill for Bitcoin to become legal tender in the island nation. Fusitu’a stated that the country’s Bitcoin bill is almost “identical” to the one that was enacted in El Salvador.

Fusitu’a, who currently serves as chairman of the Oceania chapter of the Global Organization of Parliamentarians Against Corruption, outlined five points in the roadmap for the bill’s adoption, predicting that it will pass in parliament around September or October, and potentially be legislated by the end of 2022 if all goes to plan.

In 2021, it was widely speculated that Tonga would become one of the next countries to adopt BTC as legal tender, and optimism appears to be high among Tongans in 2022.

The announcement, shared via Dorsey’s mailing list, states that the fund will help provide a legal defense for Bitcoin developers, who are “currently the subject of multi-front litigation.”

“The main purpose of this Fund is to defend developers from lawsuits regarding their activities in the Bitcoin ecosystem, including finding and retaining defense counsel, developing litigation strategy, and paying legal bills,” the announcement stated.

For more info on crypto prices, make sure to read Cointelegraph’s market analysis.

“It’s more going to be an exercise in asking questions and seeking input from the public rather than taking a lot of positions on various issues, although we do take some positions.”

“Centralization is antithetical to the ethos of DeFi and poses major security risks. Single points of failure can be exploited by dedicated hackers and malicious insiders alike.”

“We’re already at a quarter of that number, so we’ve got 24% of Americans owning Bitcoin. It won’t be that much of a stretch for it to get to a third. Bitcoin is becoming more and more mainstream. People are hearing about it everywhere — it isn’t going away.”

“Wikipedia really can’t be in the business of deciding what counts as art or not, which is why putting NFTs, art or not, in their own list makes things a lot simpler.”

“The number of addresses with the minimum number of Bitcoin is actually growing compared to the number of whales. I think you get a profound retail trend everywhere in the world; people onboarding Bitcoin, they trust Bitcoin more and more. It’s really the people that will push the price up.”

“Most cryptocurrency investors are ready to pay tax but are concerned whether their move will violate the Revenue Code.”

Prediction of the Week

Traders say Bitcoin run to $44K may be a relief bounce, citing a repeat of December’s ‘nuke’

Bitcoin had somewhat of a rocky trading week, as the flagship cryptocurrency fell to a price of $39,675 on Monday, according to Cointelegraph’s BTC price index. BTC found itself priced at $44,315 by Wednesday. The asset hit $44,448 on Thursday before subsequently dropping later in the week.

Although Bitcoin’s price increased on Tuesday, its Wednesday rally came on the same day it was reported that U.S. inflation rose at an annual pace of 7% in December, the highest in 40 years.

Even though Bitcoin’s price rallied in the days following Monday’s drop below $40,000, the potential for further downward action remains a possibility as of Wednesday, according to widely-followed Twitter personality Material Scientist.

“Remainder of bids was just pulled,” one of the tweets stated. “Either they’re done accumulating and use liquidity to chase now, or we see the same thing as in late November (pulled bids + stacked asks a few days later).”

In the case of Bitcoin trading, bids refer to buyer demand seen on exchange order books. Following its $68,969 peak in November 2021, BTC declined notably through the rest of the month, falling down to $41,614 by early December.

FUD of the Week

Liechtenstein-based crypto exchange LCX confirmed on Sunday that one of its hot wallets was compromised after the platform temporarily suspended all deposits and withdrawals.

The hack was initially highlighted by blockchain security firm PeckShield, which spotted a suspicious transfer of ERC-20 tokens from LCX to an unknown Ethereum wallet. The compromise was then promptly confirmed by LCX, which announced that several crypto tokens were compromised, including Ether, USD Coin (USDC), Sandbox (SAND) and its native LCX token.

According to an investigation by PeckShield, LCX lost a total of around $6.8 million via the hot wallet hack.

The FTC stated that the scam starts with fraudsters impersonating figures, such as public officials, law enforcement agents, or potential dating partners on dating apps, who all spin various fables to dupe the victim into sending crypto.

If the victim falls for the fake story, they are directed to withdraw cash and then head to a crypto ATM and purchase some crypto. Once they purchase the crypto, the fraudster shares a QR code with the victim that diverts the funds back to the scammer upon scanning.

“Here’s the main thing to know: nobody from the government, law enforcement, utility company or prize promoter will ever tell you to pay them with cryptocurrency. If someone does, it’s a scam, every time,” the FTC said.

According to reports from local media outlets, the State Bank of Pakistan (SBP) wants to ban all crypto transactions in Pakistan, arguing that assets such as Bitcoin are illegal and shouldn’t be used for trade.

Pakistan’s Sindh High Court reportedly held a hearing related to the legal status of crypto in the country, with several Pakistani authorities, including the SBP, calling for a ban on the sector via a document submitted to the court.

Alongside the usual tropes of investor protection and money laundering and terrorism concerns, the document urged the court to follow the model of countries such as China, whose government has stamped out the local crypto sector to pave way for a spawn of satan central bank digital currency (CBDC).

QuickSwap founder: L2s are the path to mass adoption

“If I’m a normal user and I want to do a small trade, I cannot do it on Ethereum.”

Green and gold: The crypto projects saving the planet

As the world argued about the ethics of crypto, these projects changed the world for the better during 2021.

A former lawmaker from the island nation wants to use Bitcoin to secure his country’s financial security.