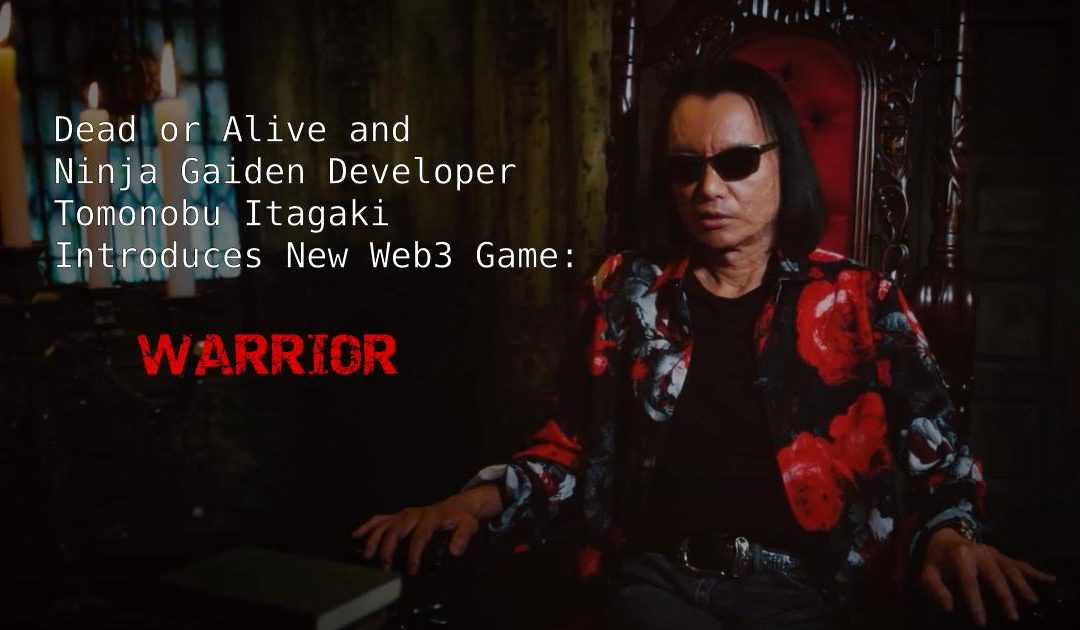 Disclosure: This is a sponsored post. Readers should conduct further research prior to taking any actions. Learn more ›

We may be chilling in a crypto winter, but don’t tell the gaming industry that. In spite of poor market sentiments, GameFi and Web3 Metaverse projects have continued to attract over US$1.3 billion in recent investments, with numerous gaming projects continuously attracting new players and launching new titles.

One such game is Warrior, a hotly anticipated Web3 game by Apex Game Studios. Notably, the game studio was founded by acclaimed Japanese game developer Tomonobu Itagaki — also known for producing the Dead or Alive and post-2004 Ninja Gaiden series, all highly popular and very difficult AAA action games available on major consoles — and Warrior is very much going to be an “Itagaki game”.

This is potentially major news for Web3 gaming, a genre so-far infamous for being more focused on making money than enjoyable gameplay. A new shift in the GameFi industry is about to happen, focused on fun over finance, and Itagaki’s Warrior is positioned at the leading edge of this GameFi 2.0 movement.

Itagaki gave a great interview recently. Here are a few brief excerpts (translated to English) from the video introducing Warrior and giving Itagaki’s views on mobile gaming and NFT games.

Warrior is an action RPG in which players get to engage in exciting tribal warfare. The game is largely focused on competitive and engaging PvP combat gameplay, drawing heavily from Itagaki’s AAA game development experience. But that doesn’t mean the play-to-earn aspect of GameFi has been abandoned — Warrior features a wealth of NFTs that can be earned by players for both fun and profit.

“I am sure, many people might worry that this game will be difficult to play, because I am making another action game like the games I’ve made in the past. I think everyone will be worried!” Itagaki joked, then went on to explain, “But it’s not hard for players to get started in Warrior. This is an action game based on NFTs, built with a friendly design so that it can be easily played by anyone.”

Warrior represents Itagaki’s first foray into NFT game development. Regarding his switch from traditional to Web3 games, he said,

“Since last year, I’ve been collaborating with new partners, working in this direction, and working on new games. That was how I came across the Metaverse. We use these new technologies to create a brand new game experience, hoping to share it with our players so they can also participate in the challenge.”

On Embracing the Web3 Revolution to Build Better Games

Warrior also utilizes another movement common in the cryptoverse — DAOs, or ‘decentralized autonomous organizations’. In the case of Warrior, players will form their own DAOs as in-game clans that battle and team up against each other in pursuit of dominance of the game’s territory and resources.

“The DAOs are embodied by autonomous clan management,”

“The tribe’s autonomous management is affected by the number of players and their level of activity. In addition to the influence of the players themselves, the DAO is also affected by the extent of the tribal territory. But players can also have a good time without joining a clan.”

Itagaki further stressed the importance of players owning their own in-game assets, and that the strength of NFT games lies in the actual retention of time, money and energy spent by the players. He compared this new paradigm to the travesty of past online game servers getting shut down and all the players’ assets disappearing with them. He also hinted that Warrior NFTs may be compatible with other games in the Metaverse.

“The Warrior game world belongs to players. Unlike traditional games, its rules are set by players instead of a gaming company. When trading and fighting, or when sharing values with each other, players can create the game experience with each other. That’s what players can look forward to with this game,”

See the full video interview below to hear all of Itagaki’s thoughts on the gaming industry and what he deems most important in good game design:

Apex Game Studios, founded by well-known Japanese producer Tomonobu Itagaki, focuses on producing highly playable, high quality and immersive 3A Web3.0 games; it currently has more than 100 employees, mainly in Japan and Singapore. Their first game released is Warrior, an ARPG game developed with Unreal Engine. The Warrior Project is about to make its initial decentralized exchange offering, or IDO, and release its first Alpha version, with a series of community giveaway events already underway.