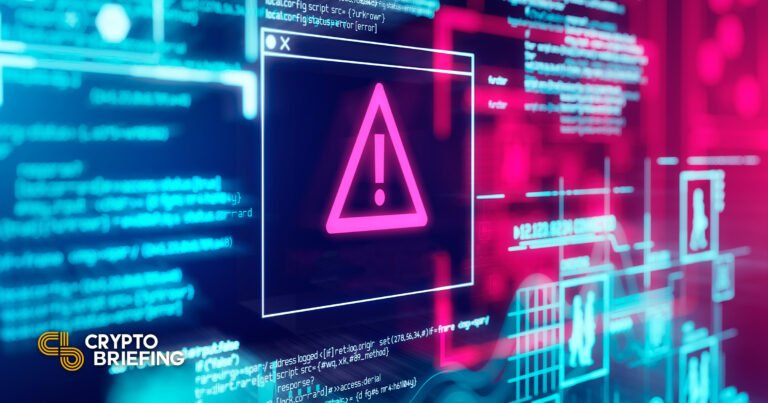 NFT exchange SudoRare scammed users out of about $820,000 in various crypto tokens Tuesday.
Immediately after the incident, the anonymous developers behind the project deleted the exchange’s website and disappeared from Twitter.
Blockchain security firm PeckShield has linked one of the attackers’ wallets to the cryptocurrency exchange Kraken.

SudoRare was live for only six hours before executing the rug pull and taking down its website and all affiliated social media accounts.

After numerous warnings that SudoRare could be a scam did the rounds on Crypto Twitter, the anonymous team behind the decentralized NFT exchange has pulled the rug. The theft has defrauded users of about $820,000 worth of ETH and other crypto tokens.

According to on-chain data, the incident occurred early Tuesday, only about six hours after SudoRare went live. The exchange, which was spun up as a fork of the NFT marketplaces LooksRare and sudoswap by an anonymous team, was supposed to allow users to create liquidity pools for NFT collections and collect fees by staking the project’s native token SR. However, soon after going live, the team “pulled the rug,” crypto terminology for stealing funds from users and disappearing without a trace. Shortly after making off with the $820,000, the platform’s website and Twitter disappeared.

The culprits behind the attack withdrew about $315,700 in WETH, $200,000 in XMON, and $314,700 worth of LOOKS tokens from the exchange before swapping the assets for ETH and moving the funds to three Ethereum wallets. Blockchain security firm PeckShield has traced the attacker to a wallet funded by the centralized exchange Kraken. “The actor behind SudoRare rugpull seems a @krakenfx user,” the firm said on Twitter today, providing on-chain evidence of the connection.

As a regulated U.S.-based exchange, Kraken is subject to “Know Your Customer” requirements that enforce compulsory identification checks of all of its customers. That means at least one person linked to the attack could be known to the exchange.

The theft occurred despite multiple warnings on Crypto Twitter that SudoRare could be a scam. “sudo rare is live but ppl staking into an upgradeable contract that points to a fork of master chef… Can’t see any reason to need an upgradeable version of Masterchef as it’s really battle tested already… stay safe as could be a scam,” one user going under Adam pointed out on Twitter earlier today. The team pulled the rug a few hours later.

Disclosure: At the time of writing, the author of this article owned ETH and several other cryptocurrencies.