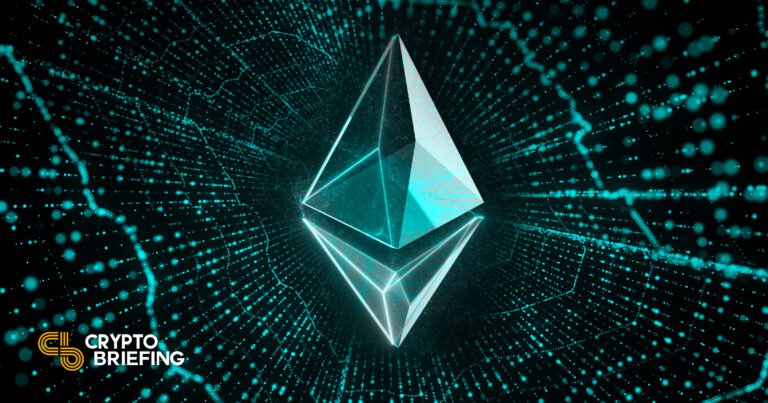 Ethereum has successfully “merged” from Proof-of-Work to Proof-of-Stake.
The landmark update will bring major changes to the Ethereum network, including a 99.95% reduction in energy consumption and a 90% cut in ETH issuance.
Many believe that the Merge could act as a bullish catalyst for ETH on a long-term timeframe, but there are reasons to be skeptical in the immediate future.

“The Merge” is one of the most significant events in crypto history.

Ethereum has completed its transition to Proof-of-Stake.

The world’s second-biggest blockchain launched its long-awaited “Merge” update early Thursday, moving the network from a Proof-of-Work to Proof-of-Stake consensus algorithm. Ethereum developers celebrated the upgrade alongside other prominent community members with a live streaming party; over 40,000 people tuned in to watch as the Merge shipped.

Ethereum switched to Proof-of-Stake when the network’s Total Terminal Difficulty threshold, a measure that determines the difficulty of mining Ethereum blocks, hit 58750000000000000000000 early Thursday. The update, known as Paris, followed last week’s Bellatrix upgrade in which Ethereum prepared its consensus layer for the main event. The switch saw Ethereum’s Proof-of-Work mainnet “merge” with its Proof-of-Stake Beacon Chain; it’s been described as the equivalent of an airplane changing its engine mid-flight.

With today’s switch, Ethereum will now rely on validators staking ETH to achieve consensus and secure the network. Proof-of-Stake is set to bring several major changes to the Ethereum network. Perhaps the most significant of these changes is an estimated 99.95% reduction in energy consumption. As Ethereum will no longer rely on miners operating energy-intensive hardware, it will become much more efficient. Ethereum Foundation researcher Justin Drake said that the move would reduce worldwide electricity consumption by 0.2% on the Ethereum Foundation’s live stream. Additionally, the network will stop paying ETH to miners, leading to an issuance reduction of around 90%. Ethereum previously emitted around 13,000 ETH daily, but now it will only pay out around 1,600 ETH to validators.

However, while most Ethereum fans have been anticipating the event, the Merge has also been a point of contention among Ethereum miners because it essentially made them obsolete. That’s why a group of Proof-of-Work advocates got together over the summer to preserve a new version of the network under the name EthereumPOW. The Proof-of-Work chain is expected to go live with an airdrop for ETH holders in the next 24 hours.

Ahead of the Merge, many crypto advocates within and outside the Ethereum ecosystem have raised concerns about the network’s ability to evade censorship in light of the U.S. Treasury Department’s sanctions against Tornado Cash. It’s feared that a Proof-of-Stake Ethereum would be easier to censor than a Proof-of-Work network since many big network validators such as Coinbase are based in the U.S. In order to uphold Ethereum’s decentralization, these validators would need to process all transactions assigned to them, even if they do not comply with the Treasury’s sanctions. Validators could theoretically choose to block certain transactions to follow the Treasury’s sanctions, which would lead to censorship on the base layer.

Coinbase CEO Brian Armstrong commented on the issue when debates over the network’s censorship resistance raged last month, saying that the exchange would rather drop staking than engage in censorship. Vitalik Buterin, meanwhile, confirmed in a tweet that he would consider censorship an attack on the network and advocate for slashing, a process where stakers lose their ETH as punishment for misbehaving or failing to validate transactions as required.

What’s Next for Ethereum?

In the lead-up to the Merge, much of the community’s attention focused on what the update could mean for Ethereum’s native asset, ETH. The number two crypto rallied over 100% from its June bottom over the summer, fueled in no small part by growing anticipation for today’s launch. Several Ethereum-related tokens in the ecosystem, such as Lido’s LDO and Ethereum Classic’s ETC, also made gains. ETH briefly topped $2,000 off the back of the run but has since retraced.

ETH showed renewed strength last week when it hit a 2022 high against BTC, sparking Ethereum enthusiasts’ hopes of a possible “flippening” event in which Ethereum overtakes Bitcoin’s market capitalization (ETH holders have been calling for the flippening for years now). However, it topped out at a ratio of 0.085 and has struggled to hold momentum since. ETH took a big hit Tuesday as the U.S. Consumer Price Index came in higher than expected at 8.3%, and it still looked sluggish in the hours leading up to the Merge.

There are some who believe that the Merge could be a “sell the news” event, likely because it generated huge hype and such scenarios are a common occurrence in crypto. Moreover, the current macroeconomic landscape paints a bleak picture for risk-on assets like cryptocurrencies, regardless of any promising updates or big launches. With inflation soaring worldwide, the Federal Reserve is expected to announce another interest rate hike next week; some have predicted that it could double down on its hawkish stance with a 100 basis point rate hike, which would likely shake global markets. Fed chair Jerome Powell has repeatedly indicated that the U.S. central bank is committed to curbing inflation; he reiterated in Jackson Hole last month that the Fed was targeting a 2% rate, which is still some way off today’s surging price rises.

Besides the macro picture, crypto has endured a slump for almost a year now, seeing its market capitalization plummet from $3 trillion to around $1 trillion. Even if the Fed turns dovish next week, retail interest in digital assets has taken a hit relative to this time last year, and crypto has few if any catalysts left beyond the Merge. While the update has been the talk of the community for several weeks, enthusiasts could tire of discussing it by the end of the year.

Despite the clear arguments for a bearish ETH and the broader crypto space today, the Merge is arguably the biggest catalyst for a rally that Ethereum has ever seen. With the network cutting its emissions by 90%, ETH will likely become crypto’s first major deflationary asset if demand to use the network remains constant (Ethereum burns ETH with every transaction as part of an update known as EIP-1559, increasing the asset’s scarcity as more people use the network). According to ultrasound.money data, ETH’s supply will peak at 120.5 million and decrease by about 1 million coins a year.

Crypto commentators have discussed both sides of the argument in recent weeks as Merge hype has grown. BitMEX co-founder Arthur Hayes, for instance, told Bankless that the Merge could be a “sell the news” event, but that he saw the ETH trade as “a no-brainer” due to the emission cut.

Besides ETH itself, there’s a broader question of whether Ethereum’s move to Proof-of-Stake will lead to an increase in public interest in the network. Cryptocurrency has occasionally been the subject of scrutiny in the mainstream, often due to the impact of Proof-of-Work mining. In 2021 and more recently, Ethereum NFTs received fierce criticism in the mainstream world, but the environmental arguments detractors made are all but redundant now that the network uses Proof-of-Stake. If the public gets used to the idea of an energy efficient Ethereum, that will undoubtedly raise questions about Bitcoin and its reliance on Proof-of-Work.

ETH is currently trading at around $1,580, putting Ethereum’s market capitalization at about $194 billion. It’s down 2% today.

This story is breaking and will be updated as further details emerge.