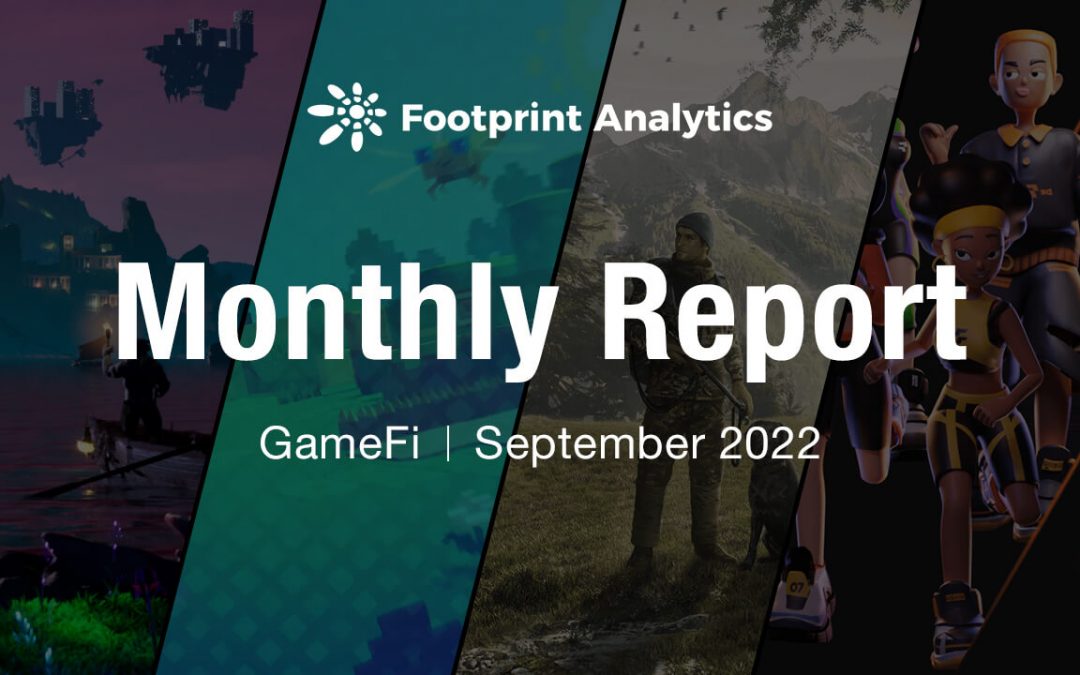 After a late-summer rally, the crypto markets pulled back in September, bringing many metrics related to the health of the GameFi industry down with it.

On the other hand, the number of active GameFi users jumped, largely due to arcade app Arc8 on Polygon and, to a lesser extent, several smaller projects on BNB.

However, even well-performing projects in September did not see large increases in their token prices. The market cap of GameFi tokens continues to decline.

The Fear and Greed index fell back to extreme fearEthereum was just 20% away from yearly lows on Sept. 22 when it hit $1,245.In the GameFi space, this pull-back manifested itself as less investment in the space and a dearth of new projects launchedThe number of GameFi projects grew by 1.3%, an all-time low for the industryOut of the 4 largest chains for blockchain games (BNB, ETH, Polygon, Wax), BNB had the most new projects, 12 in totalEthereum, WAX and Polygon had 2, 3 and 4 new projects, respectively

The amount of funding raised in the GameFi space dropped 20% MoM from $0.448B to $0.133B.Independent game studio Theorycraft received the month’s largest investment with a $50 million B round. The founding team includes names from Blizzard, Riot Games and Ubisoft. The venture into GameFi highlights the trend of established gaming companies and developers entering into Web3, even during severe market conditions.The month’s second funding round was closed by Revolving Games, another blockchain game studio.Animoca Brands continued to pour money into the space, becoming one of the biggest funders and backing the funding for Revolving Games and Thirdwave in September.Immortal Game raised the month’s second funding round with $15.5M by TCG, along with other tech and entertainment VC specialists.

The total volume in GameFi dropped 40% percent MoM to reach an all-time low since the beginning of the bear marketCounterintuitively, the number of gamers has increased sharply MoMThis indicates a decline in the volume per user, which is reflected in the GameFi Volume and Transactions per User dataRonin—and, by extension, Axie Infinity—lost 11% of market share for gaming volume. One the other hand, Polygon and BNB gained 5% and 7% respectivelyMAU jumped by 27%, 43% of which were new users (614.6K in total)—the largest MoM increase since MarchThis increase was driven mostly by new players on Polygon (88% of new players in September), a vast majority of whom played Arc8, a mobile-first arcade game

The increase of people playing Arc8 drove Polygon’s significant growth in October; Arc8 is a mobile-first GameFi arcade by blockchain studio GAMEEUnlike what would have likely happened early in the year, when a breakout performance by a game would generate hype and lead to jumps in token price, GMEE—Arc8’s native token—did not see a significant price increase, increasing by 20-30% MoM. It is still 97% below its ATH and around 20% below its June price when it had a similar number of active users.Splinterlands and Alien Worlds continue to be the two most-played games in GameFi, with overall number remaining relatively stable

After sharply jumping to almost reach “greed” levels on the Fear & Greed Index in August, the index fell back to a state of extreme fear in September.

The price of Ethereum fell as the hype around The Merge died down—though this may be purely incidental; the S&P Index also had a sharp drop in the second half of the month.

Investment in GameFi dries up

The most striking data in September relates to investment and funding. It declined from $0.448B in August to $0.133B in September.

While the end of summer is a very difficult time to obtain funding (and thereby close deals in September) the gap between this year and last is too monumental to ignore. The collapse in funding will have trickle-down effects for studios, ecosystems and developers, who will likely be much more conservative this winter.

Polygon overtakes BNB thanks to Arc8

Polygon closed the gap with BNB, a gap which looked to be widening at an accelerated pace since the beginning of summer.

Active users for Arc8 increased to June numbers, but this did not reflect in the project’s token, GMEE, which was still around 20% lower than at the beginning of summer.

One of the biggest surprises of the month was the sharp growth in new GameFi users.

The logical question is, why did the volume decrease despite the number of new users increasing.

The two projects which drove the most new users in September were:

As the macro-economic environment continues to become more and more challenging, September was a rough month for the GameFi industry.

Even strong user numbers did not guarantee increases in token prices, and investment in the sector has been cut to a small fraction of what it was months ago. In other words, if trends continue, finding sources of income to keep projects alive will be difficult. Unsurprisingly, there were almost no new GameFi projects launched—and no major ones.

This piece is contributed by Footprint Analytics community.

The Footprint Community is a place where data and crypto enthusiasts worldwide help each other understand and gain insights about Web3, the metaverse, DeFi, GameFi, or any other area of the fledgling world of blockchain. Here you’ll find active, diverse voices supporting each other and driving the community forward.